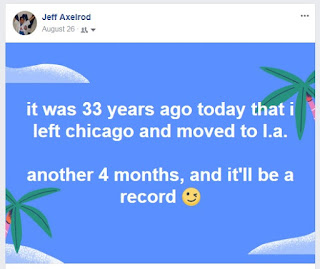 There's a question I've gotten a lot in these last 33 years: "Do you plan to stay in L.A. the rest of your life?" Every time, I've answered, "It would take something extraordinary to make me leave."

Well, something extraordinary has happened. And I'm leaving.

I've seen a lot of America, and there was no other American city that could have lured me away. But I've had a deep-seated desire to live abroad if the situation was right. In fact, during my first trip to London, I applied for a radio programming job at the BBC!

While I was in China with my father this summer, the perfect opportunity presented itself.

During our first full day on the ground in China, tour guide Terry told us that Chinese schools have been hiring Americans as English teachers like crazy, since English is pretty much the official language of business worldwide, and China is striving to overcome those language barriers.

Over the next two weeks, I spoke with a lot of natives, and they all told me the same thing: Today's young Chinese people all want to learn how to speak better English. And they all thought I'd make a great English teacher. Hmmmm... could they be right? It was a tantalizing thought.

After I got home, I took some time to ponder the idea, then enrolled at the International TEFL Academy in Chicago. Two weeks after graduation, I had a contract in hand from Liangfeng High School in Zhangjiagang, Jiangsu, China.

As I've told many people in the last several weeks, I've reached the point in my life and career where I don't want to be a replaceable cog in somebody else's money-making machine. I want to be able to do some good in the world, and if I can become one of those teachers who inspires students to go on to do great things, I will have done some good.

So, the adventure begins. I fly out on December 26. Ironically enough, four months to the day from that Facebook post. Exactly 33-1/3 years in Los Angeles will come to an end that day. Yes, a record. Now, we'll see if I can make it to 45 in China!
Posted by Jeff at 2:59 PM