24 Hours As A Buddhist At Faluo Temple 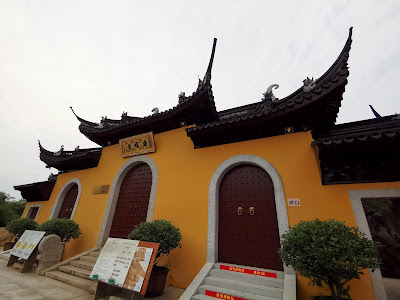 The one-lane road extending west from Guanyinshan Lu may be unmarked and nondescript, but that doesn’t mean it’s not capable of taking you on a great journey.
I ventured down that road on Saturday afternoon not knowing what to expect. I’ve visited several beautiful Buddhist temples throughout China, but I’d never had the chance to experience one from the perspective of a participant, rather than a mere tourist. 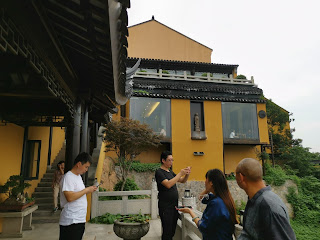 Arriving at Faluo Temple in the afternoon after a longer-than-expected trip from Zhangjiagang, I joined three of our fellow participants in a reception area that was more tea house than temple. 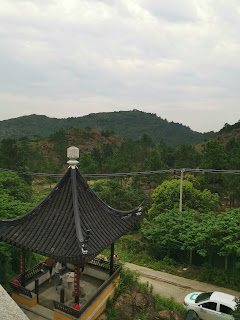 The serenity of the setting – ceiling-length windows looking out over the mountain greenery, the pillow chairs, the monk playing a Chinese flute – melted away the stress of my trip. This was my first outing with Album of Suzhou since the pandemic began, so it was nice to catch up with Helena and Polina, who I hadn’t seen since last year, and meet Rafa, a 2020 newcomer to the group. Patrick, Isabella (with three kids in tow), Bernd, and Bonny arrived, and our group was complete. 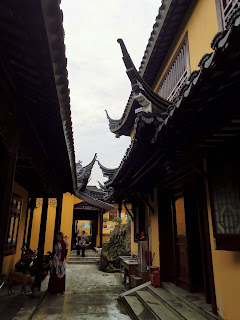 After our first meal (vegetarian, of course), we ventured out past the end of the temple road, down a path slickened by recent rains. We were surrounded by calm. The water trickling from the pond over the rocks and into the stream below. The gentle rustling of foliage in the breeze. The fluttering of moths across the path from one tree to another. It was a great way of communing with nature, decluttering our urban minds and preparing us for the evening ahead. 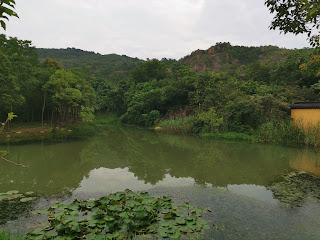 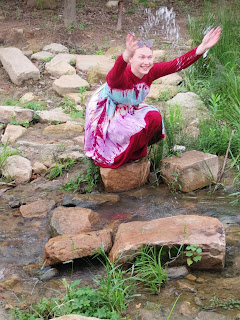 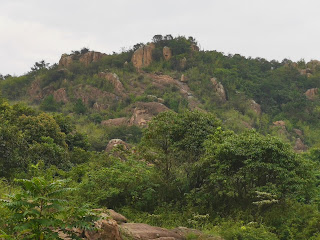 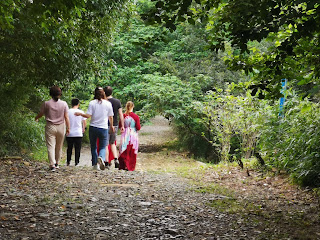 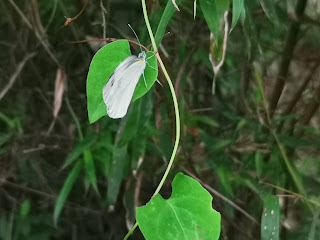 As we made our way back toward the temple, the golden walls stood in stark contrast to the overcast sky, extensions of the Earth reaching toward the heavens. 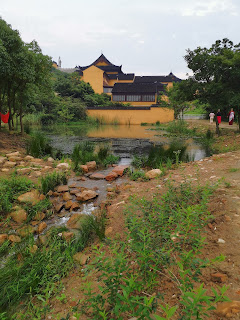 Returning to the reception room after our walk, we were given our robes. If we were to become one with the monks that night, we were going to dress the part. In the robes, it didn’t matter whether we were wearing jeans, skirts, shorts, or dresses underneath. We let go of our trappings of individuality to become a collective. I didn’t give much thought to that simple act until after we’d done our meditation, when I realized that letting go of our individual appearances had also made it easier to let go of our thoughts as we entered a meditative state.

Although I have practiced a lot of yoga, I have usually found it difficult to enter a meditative state for a prolonged period of time. But somehow, it seemed easier that night. Maybe it was the atmosphere. Maybe the fact that I don’t understand the language very well kept my thoughts from dwelling on anything that had been said. As I focused on breathing rather than thinking, I was able to find and maintain that meditative bliss for the duration of our 10-minute session.

After emerging from the meditative state and bringing our thoughts back into the room, the monk who led us in the meditation opened up the floor to our questions about what we were experiencing. Amid the talk of reincarnated forms and Zen practices, I was most drawn to the explanation of kindness as a crucial tenet in the practice of Buddhism. Although I am human and fallible, I always strive to place an emphasis on kindness in my life and in my teaching. The idea that kindness is part of Buddhism’s foundation was one I found to be very appealing.

After our questions had been answered, we went on to the second phase of the evening’s meditation, as a special guest brought out his collection of “sleep bowls.” The bowls, it is said, resonate at frequencies that specifically target different parts of our bodies. Used in concert, his bowls brought on a feeling of deep relaxation. Although I remained seated upright the entire time, I’m pretty sure I drifted out of consciousness for a while as he performed. It was a pretty surreal experience.

At the end of the program, it was time to call it a night, as we trekked to the temple’s guest rooms. I must have carried the singing bowls’ deep sleep with me back to bed – I woke up at about 3:30am convinced I’d had a full night’s sleep before coaxing myself back to sleep.

As he walked the hallway outside our doors, the monk played his wood block in a rhythmic pattern.

We woke up, got ready, donned our robes once more, and headed for the temple courtyard. 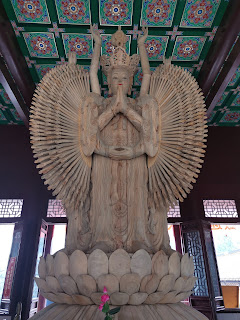 The morning sky was not yet fully brightened when we began the day’s services. First, there was some kind of invocation before this wooden statue of a thousand hands. At least I’m guessing it was an invocation; it’s difficult to know when you don’t fully understand the language!

Then, we walked in a line to the main temple hall. 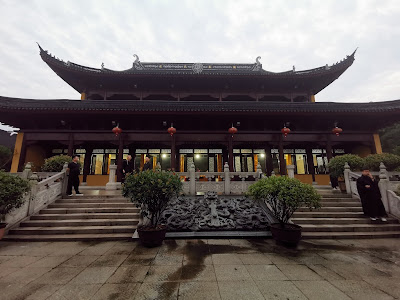 At this point, it’s worth bringing up that I do not consider myself to be a religious person. I was raised with religion, but left it to chart my own path when I was a teen. (That’s a discussion for another time, preferably over a few rounds of drinks!)

I do, however, consider myself to be spiritual. That being the case, I think it worked to my advantage that I don’t understand the language well. As with the meditation, I was able to push thoughts aside and focus on the beauty of the ceremony itself – the tones, the atmosphere, the emotional presence.

I had no idea what it meant, but the polyphonic chanting of the three singing monks was entrancing as they weaved their way through intriguing harmonies, accompanied by the punctuations of percussion. Without context, I was able to imagine that the monks were summoning energy from the universe and directing their flow via their melodies, bringing it inside the temple so that it could surround and infuse our bodies. (I may have been completely wrong, but that seemed like a suitably Buddhist mindset to me.) 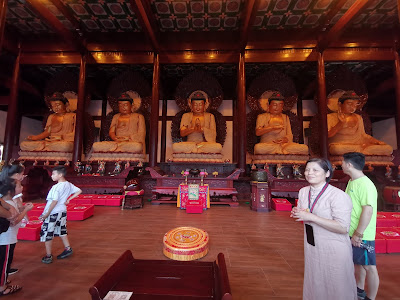 After breakfast, we were treated to a program about the temple’s long history, including the time it was owned by royalty in the 1600s, and then we took a walking tour around the grounds, getting to see things like the vegetable garden where much of our meals had been grown, the rock carvings, and the statue that overlooks the entire compound from its perch up the side of the mountain. 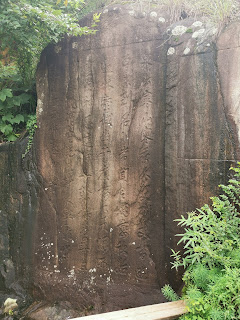 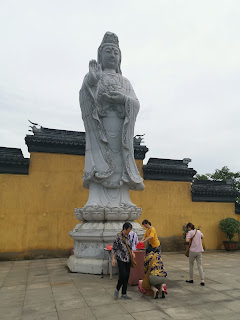 After a rest and lunch, it was time for our final activity. We headed for one of the temple’s classrooms, where AoS friend Mr. Gu demonstrated the art of fan painting and calligraphy. It was amazing to see this work of art come together before our very eyes! 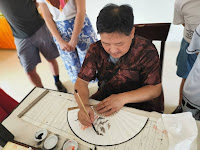 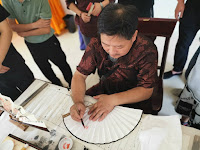 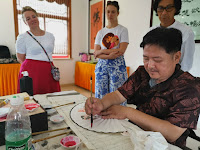 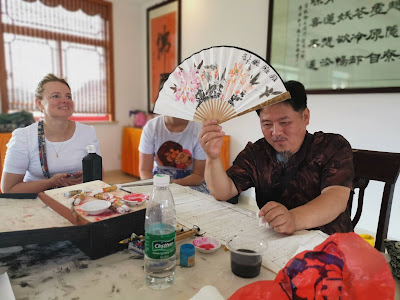 Then it was my turn to wield a brush. No, I wasn’t going to pretend I could mimic Mr. Gu’s work, but I did get an opportunity to try my hand at Chinese calligraphy. I’m just a beginner, but with the help of Tina, who joined us for the second day, I was able to start creating some drawings that could possibly have resembled actual Chinese characters! 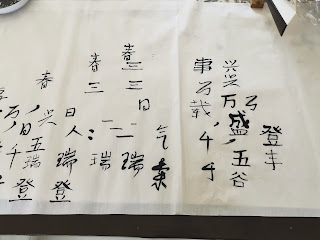 And then, we were finished … time to gather our overnight packs and get ready for the trip home.

When we take part in Album of Suzhou events, we always leave with something. Maybe it’s a deeper appreciation of Suzhou’s history, architecture, folklore, or culture. But this one felt different. We meditated with the monks. We ate with the monks. We woke with the monks. We prayed with the monks. For a day, we actually got to sample and appreciate a completely different lifestyle, one very different from our own. It may not have made a vegetarian or an early riser out of me – at least, not yet – but I could feel a much greater connection to their sense of devotion, their mission of kindness and faith. We were leaving with the some of that flowing energy still reverberating through our bodies, reminders of the peace and tranquility we’d experienced during our stay.

Of all the Album of Suzhou events I’ve experienced, this was certainly the most intimate and meaningful. Thanks, as always, to Patrick for arranging it. Thanks to our hosts at the Faluo Temple, and thank you to my fellow AoS “Buddhists for the Day” for helping make the event so enjoyable and special.