A Cold Reception From Zhangjiagang 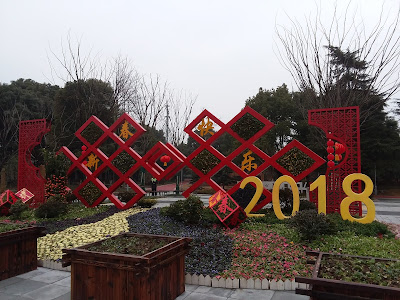 No, I'm not talking about the people I've met, because they've been great.

It's the weather. The last time I experienced this kind of cold was probably in London over New Year's 2011. Highs in the low 40s. Lows in the 30s. Some rain, some drizzle. And I haven't seen the sun since I arrived. Still, it's all good. I'm finally here in China! 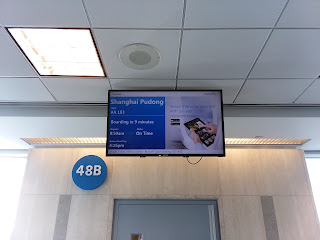 Let's backtrack a bit, shall we? After all, it's been a while since I've written. My attempted January departure date didn't work out. Even after scrambling to get all of the paperwork done on my side -- including a heroic effort by my father in Chicago to get my TEFL documents authenticated (thanks, Dad!) -- things stalled a bit on the China side. It became obvious we weren't going to get the work permit (and work visa) done before my flight date, so I pushed it back one more time, to February 18.

Fortunately, the third time was the charm, but not without a dramatic race to the finish. My school received the work permit from the Bureau of Education the night of Monday 2/12 (L.A. time), so I stayed up very late to work with my HR liaison, Sylvia, on preparing the visa application properly. Just a few hours after that, I was on my way to the Chinese consulate, because I knew I'd need to get it submitted ASAP. When I told them I needed rush service, I was very pleasantly surprised to find out they'd have it ready for me the next day, Wednesday 2/14.

When I went to pick up my visa, I discovered the reason why it was processed overnight: The consulate would be closed for the Chinese Lunar New Year on Thursday and Friday.

So I literally just beat the clock. Had the work permit been issued a day later, everything could have fallen through. Again.


Fortunately, that wasn't the case. And after a few days of frantically trying to pack up the house and getting it into storage -- a task which did not go as well as hoped (and was fraught with plenty of its own drama) -- as well as packing my bags, I was finally on a plane to China.

When we arrived in Shanghai, I must have looked like I was auditioning for a role on "The Walking Dead." Sleep had been hard to come by as my departure date approached. Good sleep had been even more of a rarity. And I wasn't able to rest much on the plane, because we hit quite a bit of turbulence on the way. So, as I passed through immigration and customs, I think I was running purely on adrenaline. (I don't ever want to see the picture the immigration officer took upon my entry.)

It's a good thing the school had sent a car and a fellow teacher, Bill, to pick me up at the airport. Between my utter exhaustion, the rain, and a heavy load of baggage, making my own way to Zhangjiagang would have been a nightmare.

Fortunately, the rain stopped, and traffic was mercifully light, so we made it to Zhangjiagang with no problems. Bill helped me get my luggage up to my temporary room (I have to wait for a departing teacher to vacate before I move in to my own, probably on Saturday), and we had some dinner.

Given my lack of sleep, coupled with the relief of finally getting here, I figured my first sleep in China would be a good one. Why did I think that? Of course it wouldn't be!

The New Year holiday celebrations continued on Tuesday with an event known as "dumpling and fireworks day." The Chinese eat dumplings and, yes, shoot off fireworks. All. Day. Long. I think it must have started sometime around 4am, and it just didn't stop. So I didn't sleep. 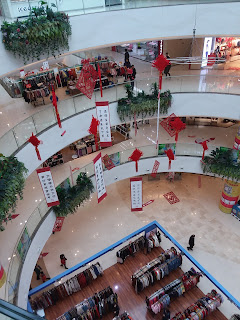 Of course, being "dumpling and fireworks day," we had to find dumplings, so Bill introduced me to one of the local malls -- very bright, very modern-looking, but (because of the holiday) not too busy. Over the New Year holiday, the Chinese traditionally travel back to their hometowns to be with their family. Since Zhangjiagang was a tiny little town that's been built up over the past 30 years, it isn't the hometown to all that many people. So, over the holiday, the majority of the people here are back home. 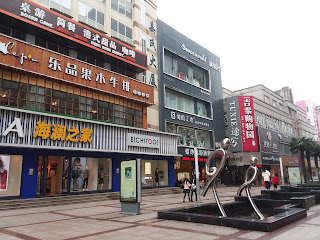 I went on a walking tour of the city with another teacher, Roni, and this is the "Walking Street" pedestrian mall in downtown Zhangjiagang. It's pretty much a ghost town right now, but as people trickle back into town over the next few days, it'll start bustling again. 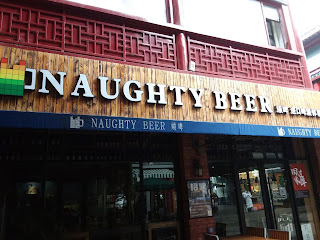 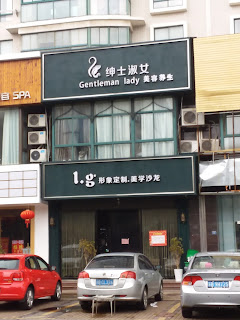 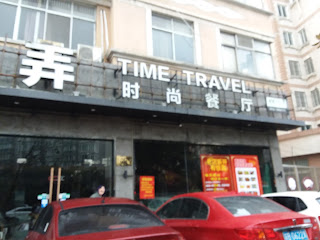 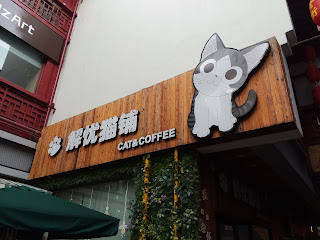 Exploring downtown Zhangjiagang was great -- and highly amusing. There are plenty of businesses with oddly translated English names. I'm not sure how the beer's been naughty, Steven Tyler could probably explain the "Gentleman lady," and either Emmett Brown or The Doctor has set up shop here. "Cat & Coffee," interestingly, is just that... a coffee shop where cats roam freely, and you can pet them or play with them as you drink and socialize. 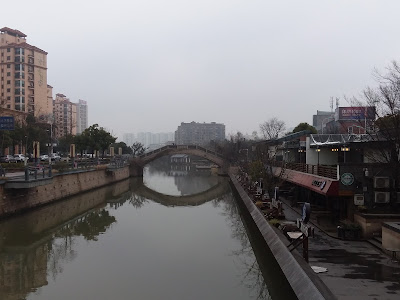 There's a lot of water in Zhangjiagang. There are a few large lakes and lagoons in the recreational areas, and several canals running through the town. 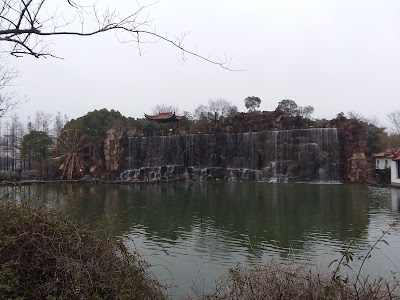 Roni and I also passed a temple along the way, and we were drawn in by the sound of people chanting in the parking lot. We weren't sure what kind of service they were having, or why it was in the parking lot instead of the temple itself, but it was interesting nonetheless. 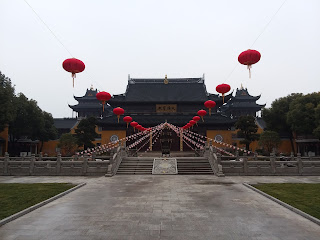 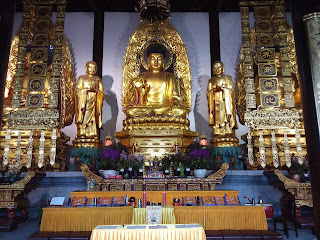 Since we were already there, might as well get a look around the place, right?

And, of course, I have to include the obligatory "Chinese food in China" shot. This was today's lunch: A Shanxi-style pork "burger" and a spicy noodle dish. Both were very tasty... and filling enough that I never got hungry enough for dinner! 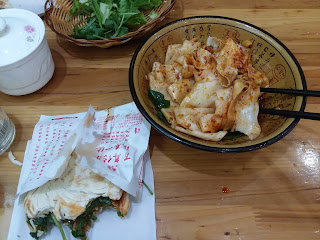 Tomorrow, I'm off to buy a bicycle, so I have some transportation around town. For now, I'll just go with a regular bike, though "e-bikes" (a.k.a. scooters) tend to dominate the bike lanes here. But I have my issues with those things. So we'll see if I ever make that transition...

Classes start on Monday, but I haven't been told my schedule (or what I'll be teaching) yet. I'm told I should find out on Friday. With precious little prep time, this really will be an adventure! Hopefully I will have made a dent in my sleep deficit by then, because I have a feeling I'll need my brain functioning at its peak level.

Wish me and my brain luck!