"Which Girl In Class Is Most Beautiful?" 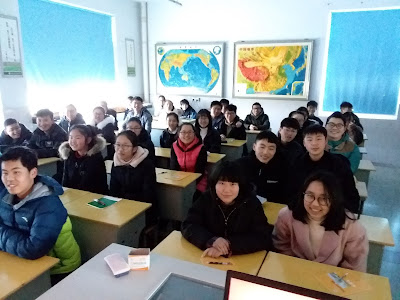 After showing you around the Liangfeng campus on Monday, I began teaching my classes at Zhangjiagang Senior High School.

I'm now five classes in, and what a great experience so far!

The picture at the top is of my very first class. Well, three-quarters of it -- the classes are big, with about 50 kids in each, and the two rows of desks at the far right just didn't fit into the picture. 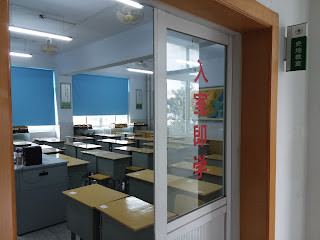 Of course, starting both a new job and a new career at the same time, I had a few opening day jitters. It's only natural, right?

But once class started, and I settled in a bit, it felt really good.

This first week is an "easy" week. Because I'm a brand-new teacher, they asked me to do a class introducing myself. Since so much of my past work involved interviewing people -- whether for radio shows, videos, or at R&R -- I decided to make that the focus of my introduction. After I showed them a couple videos of me talking to stars (including the Chipmunks, which they all got a kick out of), I turned the tables, handed them the microphone, and asked them to interview me.

It was fascinating to see what the classes would ask me. There are some of the basics that, through the first five classes, have been repeated over and over again:

There have been a few questions about my favorite things, a few questions about my hometown and family, and most of the classes have asked why I chose to come teach in China. A couple of the classes have asked me about American politics, which has been interesting. I noticed several students solemnly nodding their heads when I said our current president has made America a more dangerous place, especially for foreigners and immigrants. (Even though they're young and in a faraway land, they're aware of what's going on, and America's reputation is taking a beating.) When I saw that, I reinforced that Americans -- or any other nationality, for that matter -- should not be judged by their leaders. They seemed relieved when I told them that.

And then, there was the question that's become the title of this post:

"Which girl in class is most beautiful?"

I wasn't expecting that one. Though maybe I should have. Some of my colleagues at Liangfeng have talked about a few of the girls in their classes who are particularly vain.

As I said that, I noticed one girl in particular, off to my left, who broke into a wonderful smile.

Hopefully, I was able to turn a tricky question into a teachable moment, one that -- with any luck -- made some of the girls in class feel better about themselves.

And, in that moment, I got my first real taste of how rewarding teaching can be.