A Look Around My Campus* 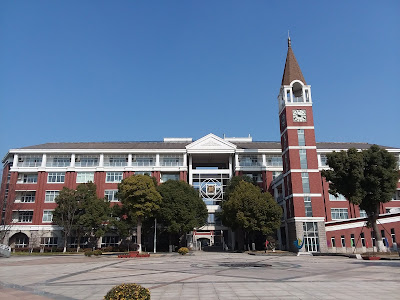 It's Monday afternoon here, which means I've been in China for almost exactly a week.

So far, so good! It's not like there haven't been any problems. I bought a bike last Thursday, only to get my first flat on Friday. I put the wrong key on my keychain and found myself locked out of my own room last night, having to pull a tricky little Spider-Man-like maneuver to get back in. One of my Chinese Jade bracelets slipped as I was taking it off, and it shattered on the hard floor. (Where am I going to find another Chinese Jade bracelet???)

Aside from minor issues like those, it's been great. A week away from my old life in America really does have me feeling revitalized. I'm finally starting to catch up on some of the sleep I'd been losing, and with a lot of bike riding built in to this new lifestyle, it seems like I'm feeling better every day.

Right now, I've got a little down time before I teach my first class, so I figured I'd show you where I live. 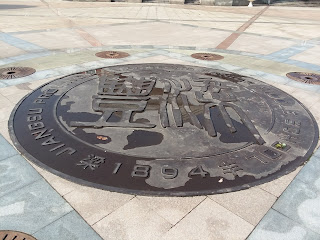 Liangfeng "Senior Middle School" has been around, as you can see, for a long, long time. It's regarded as the best school in town, and one of the best in the entire Jiangsu province. The campus is beautiful, filled with plenty of artwork and open areas. The building at the top of today's blog is where the International Program is housed. The administration and most of the classrooms are up on the fourth floor. I haven't been up to the fifth floor yet, but that's where the program has its Drama Club and Music Club. As things progress here, I can see myself getting involved with at least one, if not both, of those. 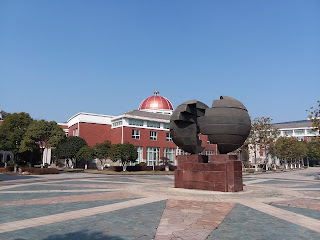 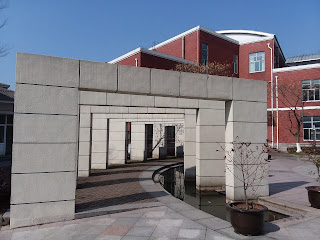 It all looks very empty in these photos, but that's not how it looks now. The students started to arrive back on campus over the weekend. A trickle on Saturday, a flood on Sunday. Coming back from dinner last night, we could see some of the kids playing flashlight games in their residences. It'll be fun to see what campus is like when it's at full speed, teeming with young energy. 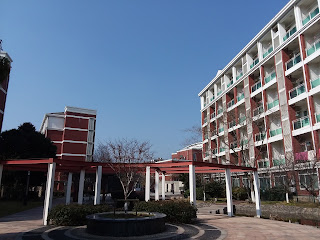 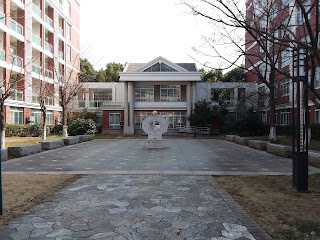 These are a couple of the kids' residence halls. I was told that about a third of the school's overall students live on campus, while many of the locals live at home and commute (like "normal" high school kids in America). It looks like the school does a good job of catering to the boarders. In addition to a huge dining hall serving lunch and dinner, there's even a convenience store on campus. 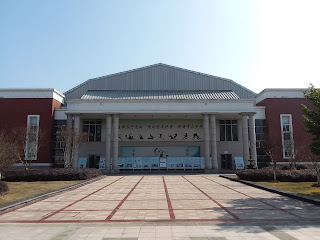 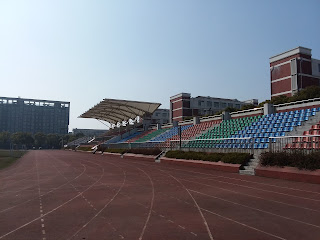 As with any American high school, athletics has a pretty big footprint on campus. The athletic building is huge! As you can see, the track/soccer field has a nice permanent stadium area. 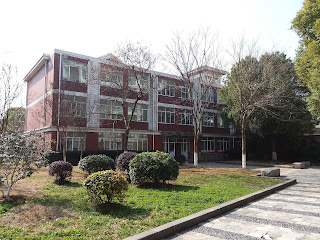 And this building is what I now call home. It's three stories, but there are only residences on the second and third floors. There are twelve units, and I believe they're all home to people from the International Program, including all of the teachers and at least one administrator. It's hard to get a handle on it all, because until Saturday, there were only three of us in the whole place -- me, Bill, and Roni.

Over the weekend, though, everyone started to trickle in. Eric arrived from his holiday break back home in Cincinnati. Sophie got back from many adventures in and around Southeast Asia. I finally got to meet Ken, who was my liaison through the hiring process, after he came back from the Phillipines yesterday. And I briefly saw Elly as she was arriving back on campus. Frank is one of the administrators, and he lives next door to me. I have to siphon off his Wi-Fi for now, because the previous tenant of my room left without giving us the password. (That's OK, it's not like I'm going to look at anything yellow and get Frank into trouble!)

Now that you've seen the Liangfeng campus, I should probably explain the asterisk in the title.

I'm writing this from my office at Zhangjiagang High School. As it turns out, once all the scheduling was figured out, there wasn't an available class for me at Liangfeng this semester. So I'm teaching at a high school across town.

It's a different kind of a program, and instead of working with the same kids, day in and day out, I'll be seeing each group of kids just once a week. My fellow teachers say it's actually a pretty sweet gig, because I get to do one lesson plan a week instead of lesson plans for every single class. And, with each lesson plan I do, I get to hone and refine it over the course of each week, so I'll get a good sense of what works and what doesn't.

Although I was originally disappointed that I wouldn't be teaching on the Liangfeng campus, the more my fellow teachers told me about what I'd be doing here, the better it sounded. For a teaching newbie such as myself, I get to take baby steps into the world of education. I'll be hanging out in the shallow end for a bit, getting my sea legs under me before I venture out into the deep end next term.

It's one hour until my first class. Wish me luck!