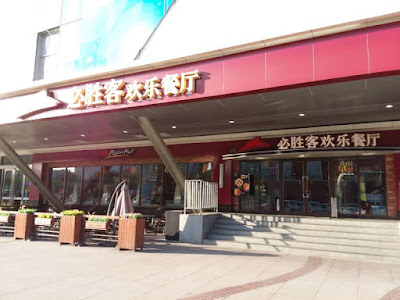 When I'm traveling abroad, I have a strict "No US Brands" policy when it comes to eating in restaurants. But I'm no longer a tourist -- I'm living here now! So I've decided to occasionally try the Chinese versions of our American brands, compare and contrast the Eastern and Western versions, and share them with you.

With that in mind, I had my first Chinese Pizza Hut experience last night, at the restaurant in Zhangjiagang Shopping Park. 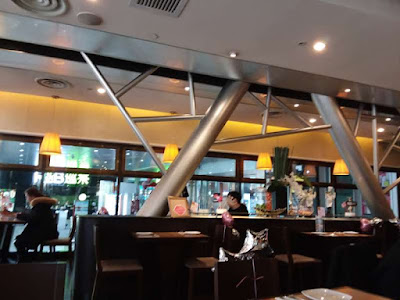 When I walked in, I expected to see the "to go" counter I've found at most U.S. Pizza Huts, but there was none. This Pizza Hut is strictly sit-down, and the decor is certainly a cut above most of the American ones I've seen. (The old location at Sepulveda and National was downright grungy!)

It's very clean and modern-looking. Inexplicably, though, it still had all kinds of Valentine's Day decorations scattered about. We did just have "Women's Day" here in China, so maybe that's some kind of cultural equivalent?

The menus -- and there were three of them: Regular, Afternoon Tea, and Specialty Combos -- all had a TGIFridays feel to them, with a lot of color and a lot of pictures.

At U.S. Pizza Huts, the drink selection is pretty limited. You've got the standard assortment of soft drinks, along with iced tea (sometimes flavored) and bottled water. Here, the beverage section of the menu was two pages. They had a huge assortment of cold drinks, hot drinks, hot and iced teas, and even alcohol (including the inevitable Tsingtao beer and an interesting looking blue margarita in a martini glass).

This is what I ordered: 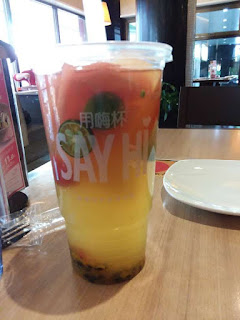 It's a fruit tea loaded up with real fruit. There was a lot of watermelon, some orange slices, apple slices, several small limes, cherry tomatoes (!), and a lot of crunchy seeds (pomegranate?) to add some texture. It was a great blend of flavors... very, very tasty. And they give you a fork with it, so you can enjoy the fresh fruit cocktail that's left when the tea's all gone.

As for the food... well, obviously, they've got pizza. Most of the pizza varieties, though, appeared to be preset -- none of the "build-your-own" pizzas, where you choose the ingredients. (Granted, maybe I'm just not skilled enough at reading the Chinese menus. They do have a few English words here and there as dish titles, but almost everything is in Chinese.) And they don't have the "lovers line" of pizzas (meat lovers, cheese lovers, pepperoni lovers, etc.) we've got in the states, either. But there are some unusual options, like a "New Orleans" pizza.

They've got a much more extensive line of pastas than their American counterparts, and many more appetizer options -- two pages' worth.

Of course, I had to go for the pizza, since that's the obvious jumping-off point for a Pizza Hut comparison. 😃

Since they didn't have my go-to, sausage and pepperoni (I'm such a Chicagoan!), I decided to go all-out and get the most "East Meets West"-style pizza they had: Peking Duck Pizza. 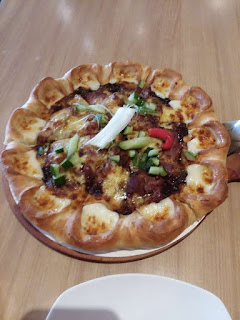 The Chinese crust bore little resemblance to Pizza Hut's American crust, which has that kind of buttery-sweet taste to it. The Chinese dough was, for lack of a better word, neutral -- your standard pizza dough, without any kind of modifiers. Not bad, but not anything special. The rest of the pizza, though, was fantastic.

Obviously, there is the duck. (Hence the name, duh.) There were pieces of cucumber, green onions, and some peppers, including that very, very hot red pepper. Had I known it was so hot, I probably wouldn't have taken such a big bite of it! And, instead of a tomato-based sauce, it was served with a thick hoisin-style sauce.

This was my first time having duck on a pizza, so it tasted a little unusual initially, but it was very good, and I liked the sauce a lot. 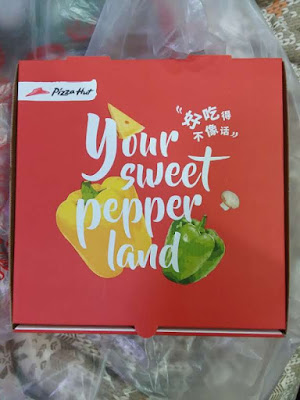 Even without an appetizer, I found I could only eat half of the pizza, so I took home the rest in a box that reminds me of the ill-fated "Sgt. Pepper's Lonely Hearts Club Band" movie, which took place in, of course, Pepperland. Ahhh, sweet Pepperland...

The total bill for the pizza and drink was 120rmb, approximately $18. So it's a bit on the expensive side, especially for China, where you can get a lot of great full-size dishes at restaurants for 15-20rmb. There's something about American brands, though, that commands a premium over here. (I walked through a department store yesterday and tried on a pair of Levi's that -- on sale -- were going for 999rmb, about $150! On Amazon, you can get the same pair for no more than $70.)

Overall, I was satisfied with the experience. The restaurant itself was much nicer, the drinks beat the American assortment by a mile, and the pizza quality was comparable -- what the crust lacked in personality, the toppings easily made up for.

However, I've been told this is about the best of a pretty lackluster bunch of pizza joints around town, so I'm really, really going to miss my Lou Malnati's pizzas.