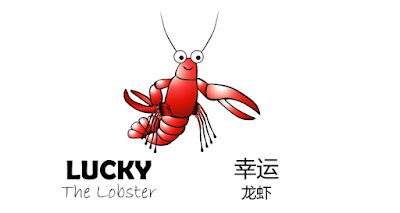 How could it not be?

The first week, I was told to do a class that introduced myself to the students. This week, I had some actual teaching to do.

Since I don't have any kind of syllabus to work with, I've got the ability to choose my own topics and the way I'd like to present them. And one of the things I'm intent on doing is teaching not just English, but also life lessons. Because my class is so different than their others -- the novelty of a foreign teacher, no exams, no homework -- I figure I have a pretty good chance of reaching them in ways their other teachers can't.

So, I called upon Lucky The Lobster for a little help. 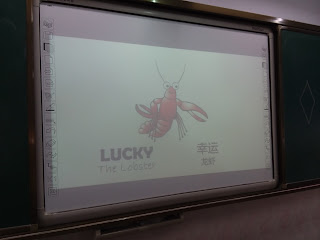 "Lucky The Lobster" was a story I wrote for a reading comprehension exercise while I was getting certified as a foreign teacher at the International TEFL Academy. We didn't have to write our own stories, but this one popped into my head, so I did. It was surprisingly moving to me -- when I got to a pivotal part of the story, I even began sobbing.

It's the story of a scrawny little lobster who, confined to his little glass house, does not see the big picture. He sees friendly-looking creatures choosing his bigger lobster friends, "adopting" them into what Lucky thinks will surely be exciting new lives. Even though he's always surrounded by new lobsters, he's lonely and insecure, wondering why he's never good enough to be chosen. 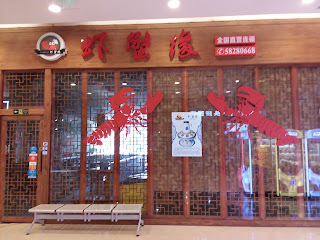 Of course, he's living in a restaurant's lobster tank. At the end of the story, when the restaurant owner has grown too old to run the restaurant and is closing it down, he explains to Lucky that being smaller than the other lobsters made him special. After a while, when his customers didn't choose Lucky, he grew attached to him. He decided he could never let anybody eat Lucky.

At the end of the story, Lucky is in a new glass house -- an aquarium -- where he has all kinds of friends and a lot of visitors who come to say hello to "the lobster that lived." He finally realizes that he is, indeed, Lucky because he's alive and he's loved. 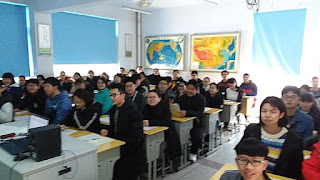 I think the story really speaks to the teenage experience. With all of the pressure and hard work that comes with being a high school student -- especially here in China, where the expectations on these kids are immense -- it's difficult for them to see the big picture. It's very easy for them to feel insecure and not very special.

It's certainly a feeling I understood, since my scrawny high school self was always one of the last two or three picked whenever we did sports in gym class, and when so many of my classmates were dating, it seemed like none of the girls was very interested in me.

And with social media now the norm, people of all ages are being bombarded with all of the happy, perfect images of the lives their friends and connections choose to present online. When everybody else's life seems 100% sunny, but you've got clouds and rain in your sky, it's easy to feel like your life doesn't measure up.

Of course, you're only seeing a small part of the picture, and the grass always seems greener on the other side of the fence. If you saw the whole picture, you'd understand that everybody else has clouds and rain in their lives, too. 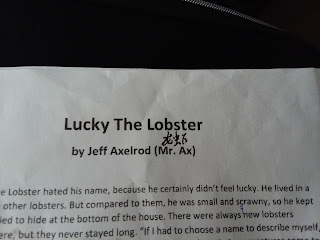 Since it's an Oral English class, the idea is to get these kids speaking, so they all got copies of the story, and we read passages out loud in class. Of course, I was hoping for volunteers -- one of the class rules is "we are not shy" -- but everyone was too shy. So, for most of my classes, I had to bring out my deck of Fox playing cards (thanks, Liz Lopez... you have no idea how useful your gift has become!!!) and choose our readers that way.

The reactions are so interesting when the kids are randomly chosen. Every once in a while, you get one who looks happy to have been chosen -- somebody who probably wanted to read but was too embarrassed to raise a hand when nobody else was. But most of the time, they have the "why me?" look. And sometimes, the other students nervously chuckle, glad they weren't the one picked.

Some of the readers were great. (One of my Friday students read a passage with such panache, I'm convinced he's going to get into acting.) Others were very timid. Some were so quiet that I could barely hear them from five feet away. But that's what the class is about: getting that speaking experience so that they gain confidence over time.

And then there was my Thursday afternoon class. They were amazing! Once the "volunteering ice" had been broken by one student 🙋, there were volunteers for every single passage. (Even though they don't know the meaning of "peer pressure" -- it's a term I brought up in discussion about the hardships of being a teen, and they hadn't heard it -- I'm convinced it's very strong here.) The volunteers all read loudly and confidently, and they really looked like they were enjoying themselves.

I'm sure most teachers with multiple classes have one that is their most special, and Thursday afternoon's class is mine. Last week, when they had the opportunity to ask me anything, they asked one of the "standard" questions -- whether I liked Chinese food -- but followed up by asking if I liked a particular kind of snack. When I said I wasn't familiar with it, this is what happened: 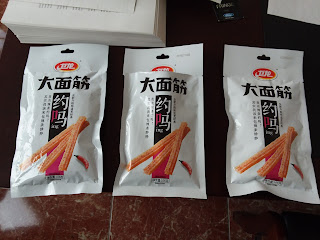 Three different students brought me a gift, so that I could try this snack I'd never heard of.

Of course, they wanted me to try one right then and there. The chili pepper on the front had me a little nervous about what I'd gotten myself into, but I had nothing to worry about. These things are actually pretty great! They've got the flavor of a hot 'n' spicy BBQ flavor potato chip, but with a chewy texture.

After reading "Lucky The Lobster," we had a few comprehension questions, and then we talked.

I let them know that, no matter what it might feel like right now, they are all special. I let them know that this is the time in their lives when they're most likely to discover their true talents, and that they should embrace them, nurture them, and grow them, because those talents are what make them special... and when they show these gifts to the world, they will be loved for that.

There were a lot of smiling, nodding heads in the class when I related Lucky's life to theirs, and especially when I implored them to find and feed those things that make them special and unique.

I've had quite a few students who have reached out to me on WeChat, too, and they were all very thankful for the positive message and encouragement. It's clear that this isn't the kind of thing they're used to hearing in school, and they were all so appreciative.

And getting to observe and read those reactions, like last week's smiling girl, was another example of how fulfilling this profession and this experience can be. 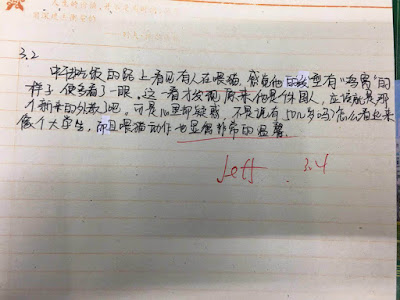 Another teacher shared this with me... his students write diary entries for class, and one of his students apparently wrote one about me. After lunch, I will often exit to the east side of the cafeteria, where the campus cats hang out and, as I mentioned last week, there's one cat that lets me pet it. According to the teacher, the student spotted me as I was doing this and said I look young like a college student.

As a 51-year-old grandfather, I will gladly take that compliment. 😊