The Week Where I Could Have Killed Myself

Yes, it's been a quiet week and a half on the blog. Physically, I've just been exhausted. That lingering illness certainly didn't help -- even after nearly three weeks, I don't think my throat is back to 100%.

But before things could get better, they took a sharp turn for the worse.

Tired after a long Thursday of teaching, I wanted nothing more than to pick up some dinner and get home. The pedestrians along Shazhou Road were particularly infuriating that evening, making bicyclists weave around them like some kind of demented video game. It was dark already, which didn't help matters.

After passing Huayangbang Road, the crowd thinned out a little bit, and I was able to pick up a little speed. But there were still plenty of people around, so I had to keep my right thumb on my bike's bell, ready to signal at any time.

That's when the sidewalk literally fell out from beneath me.

It wasn't my usual route home, and it was my first time at night. I completely forgot about the alley approach where the sidewalk dips down about a foot at approximately a 40-degree angle.

I was going just fast enough that my front wheel left the ground. And with my right hand in bell-ringing mode, it didn't have a firm enough grip on the handlebars. So, when my tire hit the ground, the jolt took the handlebars out of my hand.

The bike and I went flying out of control.

Next thing I knew, I was sprawled out on the sidewalk.

I was hurt, but how badly? I flashed back to my 1995 motorbike accident, when I felt alright... until I tried putting weight on my badly broken leg.

Tentatively, I started moving my limbs to see if they were fully functional. So far, so good. There was a little bit of blood on the inside of my right knee, and it was sore. I'd come down on my left side; my left hip, knee, and elbow were all in a lot of pain.

I gingerly picked myself up off the ground. Thankfully, there were no surprises. I could stand. I was stable. Nothing appeared to be broken.

Well, that's not entirely true. My second jade bracelet broke. My bead bracelet from the yoga resort in Costa Rica (a wonderful reminder of a wonderful trip) broke. My iPod's earbuds broke. And the plastic exterior of my tea infuser was cracked.

But I appeared to be OK.

I picked up the bike, got back on, and tried to ride away, but the chain had slipped off the gears. I fixed that, but the pedal mechanism was damaged. I managed to get home, but it would have to be repaired. (When I took it in, it turned out the pedal crank had been bent and needed to be replaced -- total cost to have the shop replace the crank and pedal: 95 RMB... about $15!)

Nine days later, my left hip still carries a deep black-and-blue bruise. There's still a quarter-sized scab near my left elbow where some skin had been torn away. And there's still enough soreness that I've been going through plenty of my ibuprofen supply. But otherwise, I'm fine.

And I know it could have been much worse.

So, having to fight through pain just to make it through each day, I haven't had the stamina to do a lot of blogging. And I've had so much to talk about... 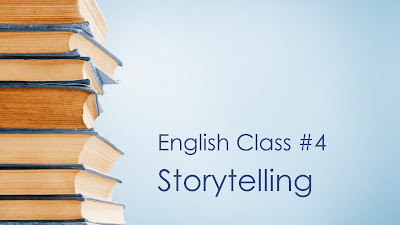 For that week's lesson, as you can see, I decided to focus on storytelling.

"How many of you are storytellers?"

A lot of students shook their heads. Some said "no." Not a single person said "yes."

"Well, then each and every one of you is wrong!"

Most of the students at my school live on campus during the week, then spend weekends with their parents. (That appears to be the norm in this part of China.) So, when their parents pick them up from school, what's the normal first topic of conversation? "How was your week? Tell me about it." (Parents are so predictable.)

Of course, they would tell their parents about their week. And that makes them all storytellers, whether they realized it or not.

We talked about different kinds of storytelling -- written, spoken, and visual -- with examples of each. They really reacted when I showed them a screen shot from a video game. "Whaaaa!"

I gave them an example of storytelling that will become very important to them in the next couple of years -- the university application essay -- and told them why it's so vital that they become good storytellers.

And then I had a simple question for them: 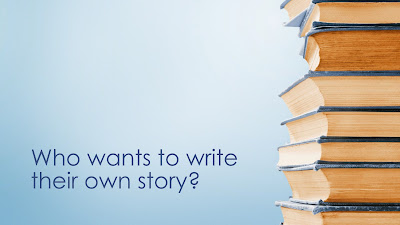 There is no homework in my class, but that didn't stop me from issuing them an invitation;

If any of them felt like writing a story for me -- a story about themselves, a made-up story, whatever -- during the school term, I would happily read it, then give them advice and suggestions about how they could be better storytellers.

If every single kid takes me up on that, I realize I'll have more than a thousand stories to read and evaluate. And I'd be OK with that. But, in reality, I know I'll be lucky to get 20 or 30. Those will be the students, I believe, who are destined for very good things in life.

That, of course, is why I'm here. And, thankfully, still alive. 😊