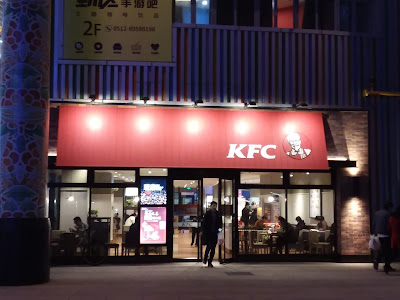 With more than 5,000 locations here, it's safe to say KFC is the most ubiquitous American brand in China. (Or, since it's chicken, dare I say... u-beak-uitous? 😉 )

You can pretty much find them everywhere (I've seen at least five here in Zhangjiagang), and even in unexpected forms -- there's a KFC-branded ice cream stand inside Zhangjiagang Shopping Park.

There's a reason why there are so many: They're quite popular!

So, I've visited a couple of them to compare them to their cousins back home. 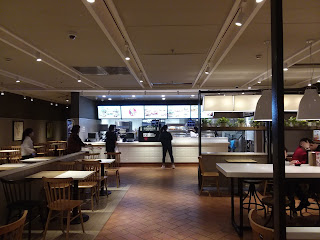 The restaurants themselves look pretty comparable to the ones back in the USA... standard fast-food decor. You've got the usual bolted-in tables, a few booths, and some larger, raised tables that can seat about 10-12 people.

Visually, it's nothing spectacular, but it's kept very clean and bright. 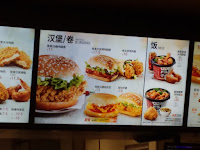 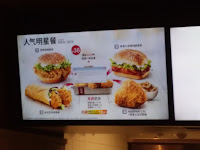 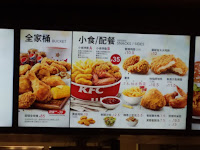 One thing you'll notice by looking at the menu is that it's heavy on sandwiches (which are all referred to here as "burgers," even though there's no beef to be found).

The Zinger, which they have back in the States, is their most popular sandwich, so I gave that a try as part of their combo meal. 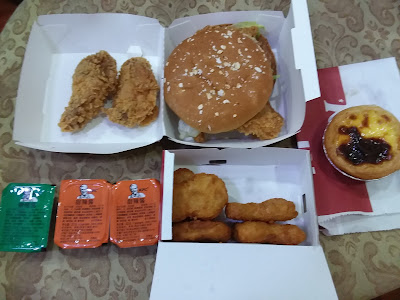 The sandwich itself tastes just like its American counterpart -- no discernible difference whatsoever.

The combo meal is a little bit different, though. Instead of getting the usual choice of two sides, you get a pair of spicy wings and a custard tart dessert. They're also very serious about their Pepsi. I've been soda-free since 1989, and it took me a lot of wrangling -- including talking to a manager -- to get an alternative drink with the combo meal.

Iced tea isn't allowed as an alternative option, because tea is considered to be a specialty drink here. China likes fancy teas, and you'd be hard-pressed to find an "ordinary" iced tea in a restaurant. And the fancier teas are more expensive, so I was eventually offered a choice of either hot milk or coffee instead.

The nuggets didn't come with the meal -- I was hungry that night and added them on. They don't have the same sauce options as the American restaurants. There's a vinegar BBQ sauce and a sweet & sour sauce. I liked both, though I didn't think the vinegar BBQ sauce was as good as its American cousin. 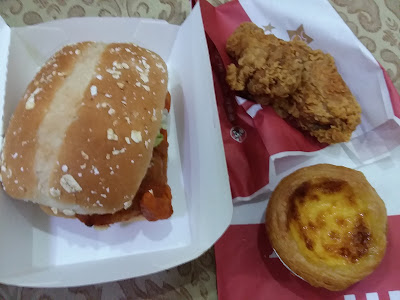 On another visit, I wanted to try a different sandwich, the "New Orleans" burger.

There was also a "New Orleans" pizza at Pizza Hut, so New Orleans apparently carries a strong culinary identity here in China. And that identity is "tomato-based spicy." But while they might be shooting for a jambalaya-style kind of authentic New Orleans flavor, it kind of misses the mark. (And I've been to NOLA enough times to know!) Its hot sauce actually tasted more like Sriracha than Tabasco, probably a concession to local tastes, and the spices only offer a small hint of Cajun flavor.

The sandwich was an interesting alternative to the Zinger, but between the two, I think I liked the Zinger better. Not that the New Orleans burger was bad, but if you're going to name something after the Big Easy, it better have big taste, and this didn't quite measure up to expectations. I'd eat it again, but it wouldn't be my first choice. 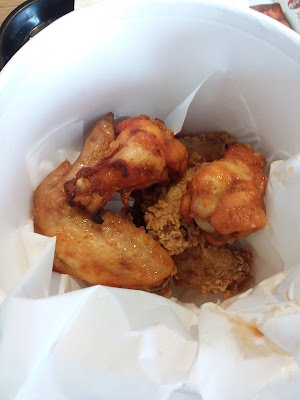 Finally, I decided I couldn't truly evaluate KFC based on sandwiches alone, so I went back for a bucket.

I got the 10-piece combo bucket, which came with three different styles of chicken: hot, hotter, and hottest.

Apparently the Chinese don't believe in "original recipe," because their basic style of fried chicken here would be considered a "crispy hot wing" back in the USA. All of the chicken is spicy in one way or another. The bucket came with six of the basic fried hot wings, along with two varieties of roasted wings -- one with the red "New Orleans" sauce; the other with more of a yellowish glaze. I'm not sure exactly what kind of sauce it was, but it was actually my favorite of the three.

As with a lot of the food here, the prices are a little more reasonable than what you would find in the States. But, because it's a foreign brand, it's still more expensive than most of the homegrown food you'll find here in China.

The value meals and the bucket were about $6 each, with the nuggets and the unseen (and very small) side of mashed potatoes each costing less than a dollar.

So, if I'm looking for some real American-style comfort food, I know I can definitely turn to KFC... but it's a good thing I prefer their hot & spicy crispy chicken over original recipe.