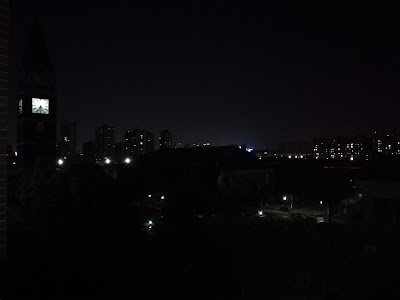 It's the evening of April 19th here in Zhangjiagang, which means it's been exactly two months since I arrived here. And it's certainly been an eventful couple of months. (Obviously... you've been reading about a lot of it.)

Starting a new career in a new country is like mental yoga, stretching your brain in ways you didn't even know it could be stretched. And, though it might take a little getting used to, you quickly discover how good it is for you. 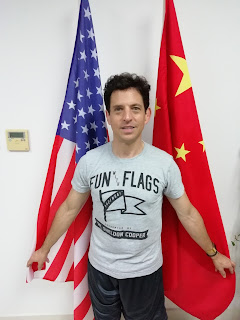 In many ways, life here is exactly like it is back in the United States. You work, you eat, you sleep, you find interesting things to do in your spare time.

But it's the differences, of course, that make it fascinating.

If you don't like music, you won't like it here. Expect to hear plenty of it. Schools play music on their loudspeakers in between periods. In the early evening, there's music everywhere, as women set up "dance corners" in virtually every open public area. (There's an intersection a block from my apartment where three of the four corners are dance corners.) Even the street sweepers play music as they make their rounds around town.

I don't miss having a car. The drivers are unpredictable and crazy here. Even though it's a small town, and you'd think that everyone would know their way around, you still find people who suddenly remember (or discover) they need to turn left -- while they're in the right lane. That doesn't stop them, of course. I've seen plenty of them make that left turn from the right lane. They'll just stop in the right lane (in traffic) if they need to look up directions, pick someone up, or drop someone off... often with no warning. And way too many drivers make turns without surveying their surroundings. So, as a bicyclist or pedestrian, you need to be vigilantly observant at every intersection.

Speaking of bikes, since I put the computer on mine, I've racked up 394 miles. Not bad for two months. Of course, that did include one accident, but again, live and learn. But it's seriously the best way to get around town, and I feel like I'm seeing so much more of the city on a bike than I would in a car, or by taking the same bus line day in and day out.

So many of the people here are fantastic. It doesn't take much to get a wonderful smile from them. As a foreigner, I can usually do it with a simple "ni hao!" Being acknowledged by a foreigner is apparently a joyful thing here. 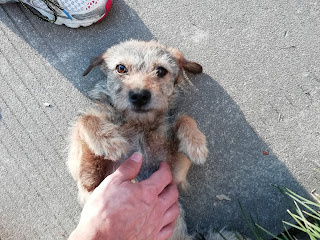 On a related note, I find that, living in a slower-paced town, it's easier to be kind to all sorts of creatures, human and otherwise. It took a while, but little by little, I gained the trust of the little stray dog who hangs out on the Zhangjiagang Senior High School campus. Now, not only does she let me pet her... if she sees me from a distance, she'll run to me! That, apparently, is not a common thing among dogs here in China. And a couple of the campus cats will now let me pet them, as well. 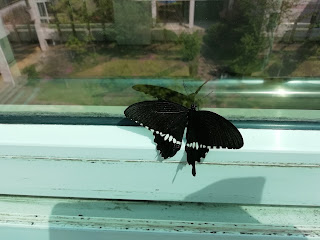 The clothes here are an endless source of entertainment. You're much more likely to see clothes with English words on them than Chinese words. The entertaining part, of course, is that so many of the words are misspelled, and/or the phrases are either grammatically horrible or completely nonsensical. And people here will wear music-oriented T-shirts without having a clue who the artists are -- that's about the only way I can explain the woman in the teachers' dining room today wearing a Ted Nugent T-shirt. I'm guessing she's never heard a song of his, and she certainly isn't aware of his atrocious politics. She probably just liked the way it looked. 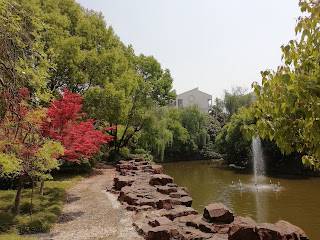 Springtime is very beautiful here... very colorful. After my first month here was a brutally cold final month of winter, it's been great to see this color emerge.

On a personal level...

I was warned before I left to take some Western medicine with me -- specifically, Benadryl and Immodium. "It'll take a while for your system to adjust," I heard. In two months, I've needed neither. And the Chinese medicine I took for my aching throat last week, an herbal remedy, did a pretty good job.

The language factor can be difficult, but not insurmountable. Sometimes it almost becomes a game of charades. But usually, we get it figured out. Of course, it helps to have a smartphone, and to be able to show someone a word in a translating dictionary, if need be. Still, I want to learn the language. I need to make time for that.

I'm finding I'm not the least bit homesick. For now, at least, this is home. I miss people back in the States, but I often get to chat with them. (How awesome to be doing this in a time when the Internet, WeChat, and Facebook exist.) As far as Los Angeles and the U.S.A., I really can't say I miss them at this point. Even though I'm in a small apartment, I really don't miss my house, either. Maybe once I've been gone longer... but maybe not. Only time will tell. But even with the major language adjustment and the minor cultural adjustments, Zhangjiagang is already starting to feel like home.

After two months, I'm happy to report that life is good here, and I certainly feel like I made a great life choice by coming here.